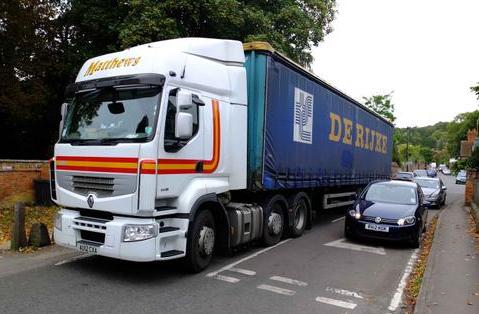 There is a 7.5 tonne weight limit aimed at keeping heavy vehicles away from our village and the narrow roads around it and ensuring that they cross the river at Caversham and Wallingford rather than take a short cut through Whitchurch. Weight Restriction Orders make it an offence to drive a heavy vehicle through a restricted area.  However local delivery and collection is allowed, hence the words “for access only” on the signs. The 7.5 tonne limit applies to goods vehicles, but it does not apply to coaches or buses.

The weight limit applies to the B471 from the entrance to the Boathouse Surgery near the Toll Bridge, along the High Street and through Whitchurch Hill to Cray’s Pond. It also applies to Hardwick Road and Path Hill as far as the junction at Goring Heath, and to roads near Whitchurch Hill. The area covered by the weight limit, in force since 2009, is shown by red hatching on this map.

The weight restriction is for 7.5 tonne maximum gross weight (MGW). MGW is the maximum legally permitted weight of a vehicle, inclusive of fuel, load, passengers etc, when travelling on a road. This figure appears on a plate fixed to a heavy goods vehicle. As the restriction refers to MGW, what the vehicle actually weighs at the time is irrelevant – it is what it potentially could weigh that matters. So it does not make any difference whether it is loaded or not. The reason behind this is ease of understanding and enforcement – it would be impracticable to weigh vehicles to determine whether they have breached limits.

Legally, any vehicle with MGW of 7.5 tonnes or greater must have reflective chevrons displayed on the rear. The chevrons are normally rectangular or L-shaped. If a vehicle does not have these it will be under the weight limit.

There is an additional control on heavy vehicles in the form of a width restriction of 7ft 6in imposed on the whole of Hardwick Road and Path Hill as far as the junction at Goring Heath. This is marked by signs at each end.

Any member of the public seeing a vehicle of over 7.5 tonnes transgressing either the weight limit or the width limit, which is not delivering or collecting its main cargo within the area, can report it on the form here.  Alternatively, the date, time, location, registration number, company name and ideally a photograph can be submitted to the following address:  Oxfordshire Trading Standards Service, Graham Hill House, Electric Avenue, Ferry Hinksey Road, Oxford  OX2 0BY   Tel: 01865 815000.

If the vehicle reached as far as the toll booth, the Bridge Company’s CCTV camera is likely to have photographed the vehicle.  In such cases Bridge Company director Geoff Weir has kindly offered to help by downloading an image and sending it directly to the enforcement staff at OCC.   Details of the date and time the vehicle was seen, and its direction of travel, should be emailed to geoff.weir@whitchurchbridge.com .

What about the toll bridge structural weight limit?

Now that the bridge has been rebuilt, the bridge’s structural weight limit of 7.5 tonnes is no longer needed to protect it from overloading.  However, the Bridge Company has said that it intends to retain and enforce the weight limit, supported by signage at the bridge, in the interests of the community.