The settlement of Whitchurch has a rich history. Apart from an early Iron Age camp at Bozedown and assorted Roman finds in the area, it really begins with the Saxon Hwitcurke, a flint and rubble church, from which the village took its name. After centuries of contention, a Charter of 844AD declared its sovereignty over land on both sides of the Thames. Whitchurch has had jurisdiction over the full width of the river ever since and on some lands on the further bank until recent years. 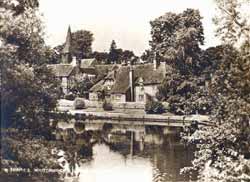 The growing village gained an important Mill and the Church was soon grandly rebuilt in typical Chiltern style. It has been remarked that our entry in Domesday is more impressive than that of Pangbourne. Whitchurch had an even greater medieval heyday, with an inland port and royal manor with its residence near to the present lych gate, from which twenty of King Edward II's state proclamations were made.

It was also served by an ancient terrace route, the Tuddingway between Caversham and Wallingford, passing along the present Hardwick Road. Until a Royal Inquisition of 1479 banned wheeled vehicles from crossing the Mapledurham and Hardwick Estates, it had provided a 'land bridge' from the lower Thames (mainly Henley) for freight to be loaded at a quayside in Whitchurch (the present Mill Drive) onto smaller boats for the upper river. Agricultural estates now took over (Whistlers at Whitchurch and Lybbes at Hardwick) and one of Oxfordshire's finest barns was built (the site of today's Old Barn Cottages), but there was a shortage of good land, even with grazing rights at Whitchurch Hill. 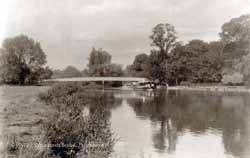 Decline was arrested in 1792 by the decision of a number of local landowners and gentry to build a bridge, which led to renewed prosperity, the construction of the Coombe Park Estate and the establishment of various genteel retirement residences, in a village which had already been castigated by the poet William Shenstone, visiting the Whistler estate, for "too much trivial elegance, punctilio and speculation." Shops and a doctor's surgery opened and the Church was further enlarged. A new owner at Hardwick created a big stir with crazes for race horses, fast cars, real tennis and literary house parties, believed to have inspired both Kenneth Grahame (The Wind in The Willows) and Henry James (The Portrait of a Lady).

Following the construction of the railway in the 1840s, commuters appeared and many village people went into domestic service or were squeezed out altogether. From the 1940s some village families moved with recent Polish exiles into Manor Road. Big houses were divided and the 1960s and 70s saw a spate of private development in the Hardwick Road area, since when growth has greatly slowed.

Two of the village's original five pubs continue and the Primary School and Pre-school thrive. Whitchurch, with its stunning situation between the river and the wooded Chilterns, now presents a delightful mix of attractive old houses and comfortable modern properties.

There is a local history society in the village - the Whitchurch and Goring Heath History Society which holds regular lectures and is the source of a wealth of information about the village.

During 2018 and 2019 historian Dr Simon Draper studied ancient documents on Whitchurch and read various histories of the village. With considerable help from the Whitchurch and Goring Heath History Society, by mid-2019 he had completed the Whitchurch chapter of Volume 20 of the Victorian Oxfordshire County History. Those who want to read Simon’s material and look at the pictures, even if they don’t want to refer to the many footnotes, will find it all in six convenient files, by scrolling down to the foot of this webpage. The hardback version of Volume 20, The South Oxfordshire Chilterns, is expected to be published in 2021. One of the world’s longest running research projects, begun in 1899 and originally dedicated to Queen Victoria, the Victorian County History is now managed by London University.

A Village on the Thames: Whitchurch, Yesterday and Today, by Sir Rickman J Godlee, 1926

St Mary's Church, Whitchurch-on-Thames: A Journey through Time, by the Reverend Richard Hughes, 1998

Footprints and Cyphers, by Robert Noble, 2001 and Relics and Monuments, by Peter Hawley, 2009. 2nd Edition, 2017  (Collected essays on village history)

Various other publications of the Whitchurch and Goring Heath History Society

Thanks to Peter Hawley for contributing most of the article above. Thanks to Nick Brazil for the coloured photograph of the High Street today.